Dear Brother and Sister Regional and Local Helpers,
The National Helpers are now still on the selection process for new National Helpers for coming term. We would appreciate it if you ,( who did not test last year  at Albuquerque national congress  about  this position), would consider helpers you know in your own regional  and local dewans,  whom you would like to encourage to step forward to test for this important job.  Usually national helpers are chosen from those who have served as regional helpers previously, but local helpers may also be considered.  The term of service will begin in August 18, 2014 and will end at the next world congress probably in 2018.
Here is how the job has been described:  The Dewan of national helpers provide support to the nation’s committee, wings and regional helpers and they are the kedjiwaan link to the zonal and international Subud Association.  National helpers are charged with looking into and knowing about the work of the regional helpers, and are charged with participating in addressing members’ difficulties that cannot be solved by the regional helper dewan alone.  National helpers “must keep themselves informed about the progress of the members and impart to them  a deep understanding of the truth of the latihan kejiwaan of Subud so that the inner selves of the members may be truly Subud.”. (from Bapak’s Advice & Guidance for Helpers, “The Helper Structure:Dewans,” Candidate Helper Information handbook)

To really understand what is required to do this job well, please translate the above description into a good amount of time and patience  needed to stay informed and in touch through regular email messages and participation on frequent conference calls.  There is also a fair amount of travel that is necessary.  It is helpful to have a space where one can do latihans without interruption and to have an agreement with one’s family, partners and housemates to share your time, energy and attention.  There is a great spiritual benefit that comes from being willing to serve in this way.

Those who would like to put their names forward should pretest with their local or regional helpers first.  Once pretesting is positive, please send your name to any National helper(Alexandra Boyer, Aminah Ulmer, Laurie Lathrop, Suzanne Renna , Hoan Toan Phan,Humphrey Williams, andSjarifuddin Harris).

The National Helpers will meet together and test about this issue in Denver, Colorado from Jan.30 to Feb.1st , 2014.
We will test with those candidates  over the phone by conference call  during the weekend Jan. 31 and Feb.1st, 2014.Thank you for your help with this. The final step in the process is to select  a new dewan that will work well together from the pool of those who received a positive response through testing with the national helpers.
Please feel free to contact us with any questions that come up as you are trying to respond to this request, and please let us know who is putting their name forward by email or phone before Jan. 29, 2014.

Apparently the death of Deliana Fuddy is bringing out the paranoid, as hits on the Subud Greater Seattle website got over 800 and counting by 9pm tonight. Most of the hits are coming from the political movement known as the Birther movement, which believes President Obama was not legally born in this country and, as such, has no right to be in office. That Deliana died in a plane crash has the fertile imaginations of these folks in rare form. See the stats:

The linking websites are: http://www.americanthinker.com/2014/01/barack_hussein_soebarkah.html and

As Marston Gregory once joked with me: “If Subud were a cult, we’d be more organized.”

Who’s bringing the kool aid to the Sunday potluck?

THE PRICE GOES UP $100 PER PERSON AFTER JAN 31. FOR THE WORLD CONGRESS IN PUEBLA, MEXICO.  IF YOU WANT THE LOWEST FEES, PLEASE REGISTER ON OR BEFORE JAN 31. (Last one in is a rotten tortilla.)

Don’t forget we have our annual meeting this Sunday Jan 26 after latihan/lunch at the Seattle Subud house. Please bring a potluck dish to contribute for a healthy, delicious lunch. Or bring pizza. (Gluten free pizza.) Following lunch we will have our annual meeting. Find out what’s going on in Subud. The current Dewan has been in office for one year. What do you like about Subud Greater Seattle in that time? What could use work? Are we done with Forgiveness Days, or are we just getting started? Come share your thoughts, help us build a better Subud community and hear about plans for the coming year from your Dewan.

I have sad news. Longtime Subud member Rochanah Weissinger passed away unexpectedly last night. She died in her home possibly of a heart attack. She will be greatly missed by her family and the many friends she has made over the years.

Rochanah was a member in Marin, LA and most recently Chico. She served as a Helper, California Chairman and Zone 7 Representative for WSA. She was a strong advocate for others and she was a steadfast friend of the Cuban members. She will be deeply missed.

May God gently guide her passage.

This from the January Subud E-Blast:

On Saturday, December 28, Subud Washington DC had a selamatan to pray for the assembly of the new Subud house. About 40 brothers and sisters attended, from Subud Central MD, Northern VA, Fairfax, New York, and Washington DC. John Tjia, chairperson of Subud NY was present to represent Subud NY. There was a simultaneous latihan for men and women; East Coast Regional Helpers who could not attend did latihan long distance. Afterwards, a potluck dinner was served.

The remaining tasks that need to be completed before occupancy are: geothermal/HVAC, electricity, water connection, grading, sidewalks, deck, landscaping, and furnishing. $50,000 of the $200,000 still needed has been raised in the last few weeks. For those wishing to assist, send a check to Subud Washington DC c/o Barbara Thomas, 5957 Second St., Deale, MD 20751.

The minutes of our January 5th meeting are now available for you to read including our financial report, plans for our 2014 budget and an update on our Spring Street Center.

YOU ARE INVITED TO:

After a year’s hiatus, the Skagit Valley Birder Tour, a benefit for Subud Bellingham/Skagit Valley, is back. To register, contact Hadea Tift at (360) 661.3109 or at hadea.tift@gmail.com. 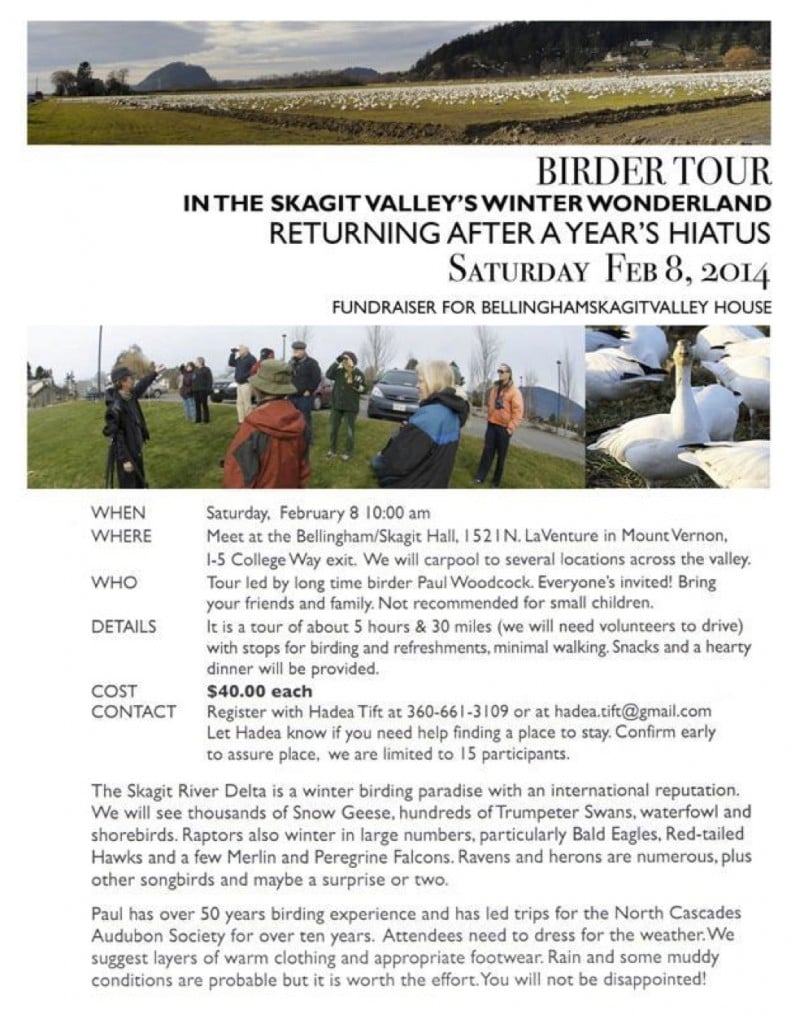 Annual meeting on Sunday Jan 26 after latihan. We’ll have potluck lunch at the Seattle Subud house and then come hear what’s going on in Subud.