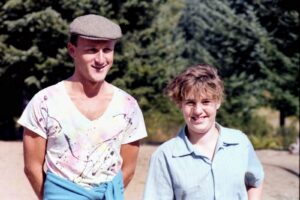 Patrick Morgan with Maria Cantrell, circa 1987 at an early PNW camp.

Those of us who have been around for a while might remember Patrick Morgan who passed away very recently.  I was going to do a tribute to him in the newsletter but Paul Nelson has created an excellent one in the SICA news so I am posting the link below and urging all who remember Patrick to read it!  Patrick also wrote a memoir of his life which is also in the recent issue.  I remember him as a gentle, hard working soul who did a lot of work for Subud in the late eighties and early nineties.  He along with a lot of other folks performed a ‘Peace Dance’ at the Evergreen College which was attended by many and seemed well received.  I did a video of it but never got it put in a viewable state on the Internet.  I have often wondered about what happened to Patrick in later years and this article, by his friend Mandy Landa, and his memoir has satisfied my wonder!  Check it out!