The really good news is we now have a chair (Jim O’Halloran), a vice chair (Ramon Hildreth), and a secretary (Alexa Wichert).
Even more good news, we are intending to hire a bookkeeper to do the books for Subud Pacific Northwest, Subud Portland, and Subud Seattle so the local treasurer’s  burdens for the region, Seattle and Portland, will be much lighter.
Oswald left the books in great shape with excellent documentation and will be happy to help train a new treasurer if that person would like any guidance.
The time commitment will be much decreased from the current situation.  Oswald would be happy to speak to his time investment so you know it will be less than that!
Please step up!  The group and committee need you!
Jim O’Halloran
ojim1@blarg.net
206-817-2066
https://jimohmusic.com
*{Note from Rachman}  My very first job in Subud was shortly after I was opened. I was given the job ‘assistant treasurer’ in the San Francisco group, even though I knew nothing about how to do it!  Years later I was also treasurer of Subud USA for a while back in the day, also without knowing anything about bookkeeping, etc.  The benefits of both jobs were way more than the work I put in and working and becoming friends with the rest of the committee were very valuable lifelong blessings!
I recommend the job!

I was participating via the Zoom format so this will be a very limited report!

Thanks to everyone who participated in the general meeting today, especially Paul, who made it possible for me to understand, in part, what was being said by transcribing and interpreting comments!  Sorry I missed a lot (most) of the comments due to difficulty in hearing and understanding the words.  I think the acoustics in the room are not very good for the Zoom format.  Hopefully a solution can be found if we have future meetings in this way.  In all, I think it was an interesting experiment and a step forward in new Subud technology, although maybe not new in the rest of the world!

From what I could hear and understand, the meeting went smoothly and proceeded with the selection of a new (old) chair, Jim O’Halloran and vice-chair, Ramon Hildreth!  Congratulations Jim and Ramon!  There were various reports and comments, most of which I could not hear or understand, but it all seemed to work out with good results in the end!   We agreed as a group to give money to SICA USA and Susila Dharma.  We managed to get through the testing in a relatively smooth and timely manner with mostly unanimous results.  We had a very thorough treasurer’s report from Oswald which hopefully will be included in the minutes.  Unfortunately, I was not able to hear or understand it but the impression I got was that we are doing okay!

Thanks to Jim, for being willing to continue as chair and thanks to Ramon for stepping up as
vice-chair!  Also, thanks to Annie for agreeing to take on the treasurer job and Alexa for her
willingness to serve on the committee!  Thanks to Elisha and Rayma for the very interesting
helper reports and to everyone else who contributed!
Regarding the Eastside latihan, it was decided to continue with the rental even though
attendance has been very minimal. Hopefully attendance will increase in 2022 with new
commitments from those who voted to continue the rental!
Thanks again, 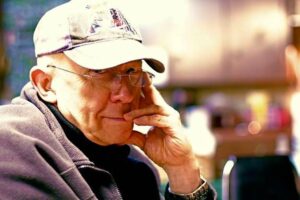 Photos from our Christmas party, 12/12/21!  A good time was had by all, we enjoyed great food and Alexa (Santa Claus) gave presents to everyone!  Click the link to see the photos! What I learned by being a part of our committee

Part One – What It Takes To Make a Team

I have been a part of a lot of teams both in a leadership and in a support role. As I have done that work, I came to understand that the best teams have the following components:

When I became treasurer in February of 2019, I was pleased to discover a committee that already had in place all of these components.

I was welcomed into the work that they were already doing and brought up to date on current issues facing our group that I needed to take care of as the new treasurer.

I was aided in my transition into this new role by Sherwin O’Bar who handed over the documentation I needed to begin to learn my duties. I had been the group’s treasurer when our family first move to the area in the early 90s. A lot had changed since then. I so appreciated Sherwin’s guidance and his answers to my many questions.

As the newest member of the committee, I needed to learn our committee’s processes. In our monthly meetings, I mostly kept my head down as I tried to recreate the excellent reports that Sherwin had been providing our group for years. The rest of the team was very patient with me. After about 3-4 months I began to feel comfortable with my new role and took on more duties working with our Spring Street Center (SSC) team.

Jim had created job descriptions for each role at SSC. Each staff member had read these descriptions and signed their acceptance of them. The job descriptions included rates and rhythm of payments for services. It included how we would pay for the supplies for SSC. This documentation allowed me to see when payments were due for payroll and supplies. I appreciated the order that this created in my early work.

The work of any committee – if it just involves taking in the donations and paying the bills – takes on a rhythm that is pretty easy to maintain. It’s when you are faced with challenges that you learn what a team is really made of.

The first challenge I saw as a member of the team was the need to repair our sewer pipes that were experiencing a lot more traffic than they had before we started our Air BnB business. We would have eventually discovered the roots blocking the pipe. The business just brought it to our attention sooner.

Our house manager at the time was Marston Gregory. He interviewed multiple contractors and hired Bob Oats Plumbing. Soon our pipes were clean and running again. I wonder how long it would have taken us to get this work done without a House Manager with a clearly defined job description who could help the committee with the care of the building.

In my next part, I want to talk more about how our monthly rhythm helped us to make bigger decisions.

At last Saturday’s dewan meeting, one of the helpers attending commented that they thought that we were doing such a great job that they couldn’t imagine anyone else doing the job as well as we did. And, they were afraid of what would happen if we didn’t continue as the committee.

That started me thinking – “Hey Wait A Darn Gone Minute. If you can only imagine a future where those who have done it before are the only ones that can continue to do the work, then you’re setting the committee up for burnout. And, you’re saying that if one, or all, of the committee members were to leave suddenly, there would be no other option than to stop having the work of the committee done by members.  What then? Would we just pack up and shut the place down?” Maybe.

I would like to challenge each of you: Don’t allow yourselves to think we committee members are the only ones capable of doing the committee work.  Imagine a future where you, along with others, willingly start doing these jobs. And as a result of this willingness, our group has more and more members capable of keeping our center running and growing.

How did we learn to work together?

The way that we “learned” to work together was by working together.  In the beginning we brought many different skills to the work of the committee. However, we hadn’t worked together as a team before then. We needed time to find the right way of listening, collaborating and supporting each other in our individual roles.

As we did, the work became easier. And we also began to understand, through this mutual respect and work, that the work of the committee was too complex and needed to be simplified. This we have done.

How would you learn the roles?

Each of us has committed to assisting the new members of the committee through training, documentation and mentoring – when asked. You won’t be left without an understanding of where we are in the work. You will be left to figure out how to move forward as your new committee grows in experience and confidence.

We will also stand in support of you as you begin to carry out the work. We will continue, as active members of the group, to help in the work of the group. Some of us as helpers. Some of us through our hands and talents.

Last year, as I was writing the annual message, the pandemic was already in full swing, affecting our lives in general, and our Subud lives in particular.
Alas, things have improved only marginally, and parts of the world are now suffering the worst of it. We continue to be tested in ways that were unimaginable only 18 months ago.
Latihans in many countries are limited, with members having to do their latihan at home on their own.
The International Helpers have not been able to travel, of course, and that limited the ability of the WSA to serve you as we would like. International gatherings planned for 2020 had to be canceled, and all essential meetings migrated online – not just meetings of the international bodies, but also many national congresses.
The international congress had to be postponed and is now scheduled for early January 2024.
If there was a silver lining, it was the increased attendance at these online / Zoom meetings by members who otherwise wouldn’t normally attend. Working online allowed the organizational side to continue, and a lot of useful work has been done.
In the likely scenario where our ability to travel remains curtailed for a while yet, I would like to encourage everyone to join us as observers – at least at the quarterly World Subud Council meetings. We welcome your interest in the work of the Council, and it has never been as easy to observe our work.
We are encouraged by our ability to keep in touch and support each other during this dark, long winter, finding that our organization is resilient and capable of handling the crisis.
Please stay safe and healthy, take good care of each other, and hopefully we shall all meet in person soon.
Nahum Harlap
WSA Chair

Click the link to see photos from July 4th.

Offers a program with 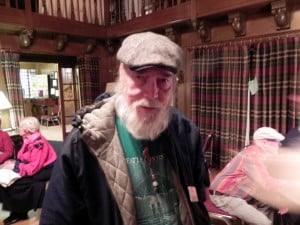 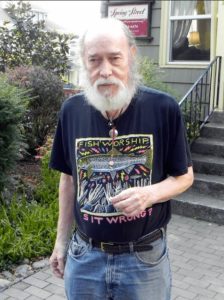 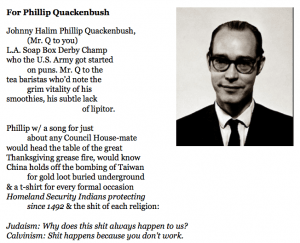 I found this article in an old Subud USA publication.  It gives a bit of Subud Seattle history, written by Sebastian Tedrow around 1974. He describes the building which was formerly owned by the ‘Deaf Lutheran Church’ and goes on to say “Almost every member has seen the place and expressed joy at being in the building!”  I hope we will keep continuing that feeling of joy for many years to come! 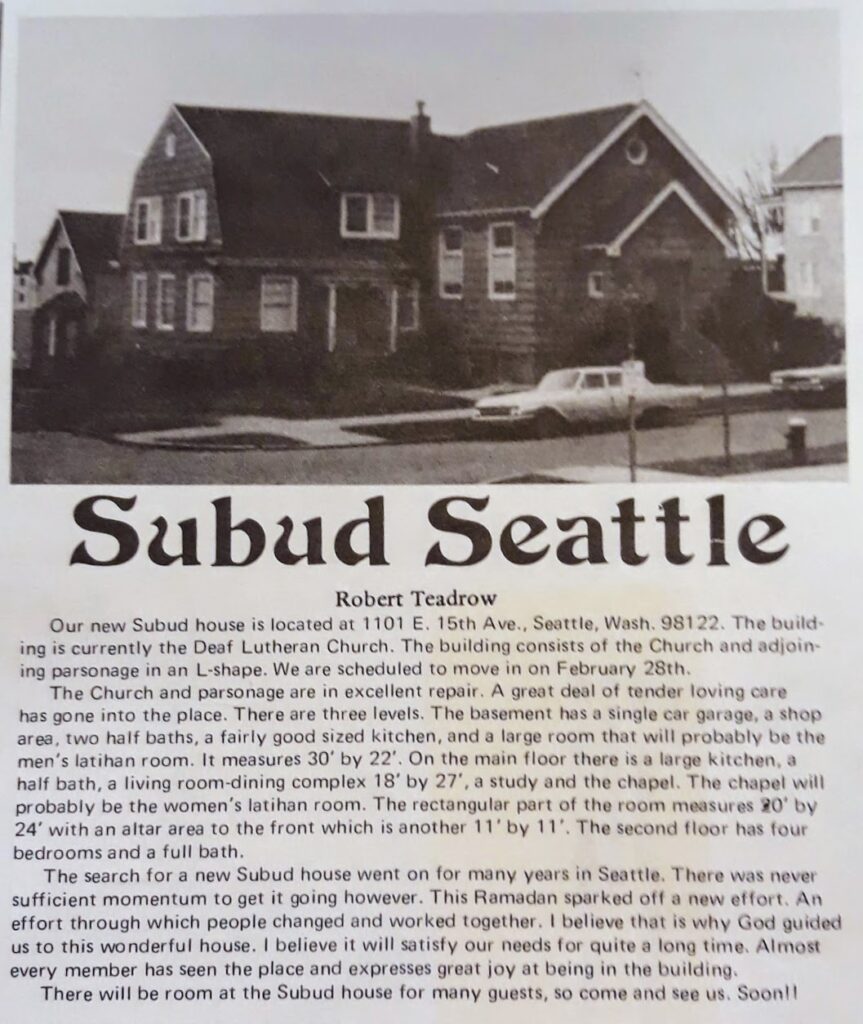