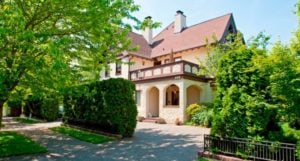 Chuck: The history of Subud in Seattle starts in 1959. We were opened by a group of Subud Members from Vancouver BC. Members of the Vancouver group were originally opened by the Von Bissings who I believe were on a world tour to promote Subud and sailed from San Francisco to Vancouver in a yacht. The Von Bissings, who had been living in Cyprus, were opened in London in 1956 by Hussein Rofe. Of course they knew John Bennet and some of the early people who brought Subud to the West.

Ann and I were opened in what later became the first Subud House in Seattle. It was quite beautiful. It is still there, a stately mansion, stucco, half timbered, 3 floors plus a basement, a garage and a carriage house. Many people prior to and after Subud lived in the many rooms. There were 5 bedrooms on the second floor and various other bedrooms on other floors. The main floor had a living room and dining room, library and adjacent to that was a kitchen. The rooms had beautiful hardwood paneled walls. The ceiling was white plastered ceiling with heavy wooden beams. There were tapestries, big French doors and windows which looked out on the gardens. It was on Capitol Hill at the corner of Broadway and Prospect.

Sebastian: The address is 959 Broadway Ea. It is currently a Bed and Breakfast – “The Bacon Mansion.”

Ann: From the upper windows, where we lived, we could see the Seattle Center across lake union. When we lived there we watched building of the fountain from our bedroom.

Sebastian: From the Subud House you could watch them building of the Seattle center for the world’s fair?

Chuck Yep. The house had a long history, probably built about 1910. They still had horses and wagons and carriage houses in those days. It was in a nice neighborhood of old tree lined streets and similar mansions. Before it became a Subud House it was leased by an organization called the “Center of Integration”. That was when I first knew about it. I occasionally attended Sunday morning meetings there. I attended a few lectures on Sanskrit and yoga. The Center was led by two men. The dominant gentlemen was Robert Carr. His partner was a man named Connie. Robert gave most of the lectures and did psychic readings. He was a student of oriental religions. His goal was helping people presumably to achieve Satori or Samadhi or enlightenment. He was a student of Yogananda and Krashnamurti. He had maybe 30 or 40 people who came every Sunday for his lectures.

Before I knew anything about Subud I would sometimes go to listen to the lectures. I also went to Vedanta Society about 10 blocks away and sometimes to the Theosophical book store about 6 blocks away. In those days I was probably 21 or 22 and had been a spiritual seeker most of my life, and had studied oriental languages and philosophies. I had a BA degree from the University of Washington on Far East and Russian History. People would come to the Center of Integration to give lectures. One of the people who came was from India and he taught lessons in Sanskrit. He knew Yoga and I wanted him to teach me Yoga but he never did. And that is how I became acquainted with the building.

I became personally acquainted with Subud when I was doing research in the University of Washington Library and came across deep in the stacks a series of issues of the magazines called “Tomorrow”. For some reason I pulled one of them out and there was an article about Bapak and Subud. I read that a person once being opened could receive the life force and could open others and pass the life force on to them. I thought this was too good to be true.

The article stated that the main problem for people seeking enlightenment was to quiet the mind and various techniques had been developed to do this. But in Subud it was easier because the latihan did it for you. I thought this was a miracle if true. I told my old friend Rashad (then Robert) Hopkins who was studying art at the University of Washington. In later years he has operated art galleries in San Francisco. I told him about Subud and we decided to seek it out. We found that there was a small group of Subud Members who had been meeting for a few months in private houses. We also found that the Center of Integration was interested in Subud. The original Subud members and some of the people from the Center of Integration became the core of the Seattle Subud group. They began to do latihan at the Center.

Ann: Was Betty Warden one of them?

Ann and I were married in September 1957 before we joined Subud. During those early years of our marriage Ann and I and Rashad went down to meetings held at the Center. We decided we wanted to be opened, partly because we admired the quality of the people.

No one had been opened long enough to be helpers, so the helpers came down from Vancouver BC to do openings for new people who wanted to join. One of the Canadian helpers was Joe Koach. The first members of the small Seattle group were already opened. We were opened in January of 1959. Many of Robert Carr’s followers also joined Subud but most of them fell away eventually.

Ann: I don’t think Baldwin Ancioux or Dianna Dickstein came in this early.

Chuck: About this time, (1959) Bob Carr and his partner Connie dissolved the Center of Integration and got regular jobs. They eventually moved to San Francisco. The Subud group inherited the lease on the mansion.

The whole building was an Ideal Subud House, big enough that you could have all of the latihans and the noise and the neighbors wouldn’t even notice. We could do simultaneous latihans and still have plenty of room for probationers.

Ann: I think the men did latihan in the library.

Chuck: Yes they did. Sometimes when the Canadians were down there would be very large groups. I believe there was a way of shutting off some of the rooms.

Our relations with the Canadians were close. In fact the first Subud Northwest combined British Columbia with the Washington and Oregon groups. Later, at the suggestion of Bapak, BC was separated out so there was a separation between the two countries.

Chuck: Ann and I were asked to become caretakers of the house. So we went to the top floor and made that into our living quarters. We cleaned it all up and repainted a lot of it. It was quite beautiful. It had been a Ballroom with beautiful hardwood floors. From the windows you could see the Seattle Center and some of the world’s fair preparations while we were there.

Now it became a Subud house we lived there and tried to keep it up, and manage it. We had a Subud book store where we sold Subud magazines and books like Tarzie Vatachie’s Reporter in Subud and Bapak’s book Susila Budi Dharma.

Ann: We carried copies of these books all over the world. So now after a year of this life we received our commission to join the Foreign Service and we left Seattle in January of 1961.

Chuck: We left in January 1961 to join the Foreign Service and moved to Washington D.C. about six days after President Kennedy’s inauguration. So our intensive time in Subud Seattle was in 1960 when you and I became Helpers.

Ann: Just at the time we were leaving, I was pregnant. Our oldest, Evan, (formerly Jack) was born before we were opened. Our second and third were born in Washington DC. We did latihan with the Washington group. We came back to visit Seattle several times and did latihan, first in the old house and finally in the smaller Belmont Avenue house.

Ann and Chuck Cary are currently living in the Olympia area and have helped revive the Olympia group.