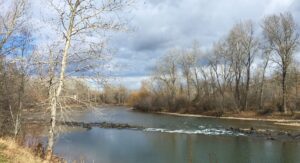 The Idaho River near the Brugger home.

I met Halimah and Sofyan Brugger in the mid-90s at our annual Subud PNW Kedjiwaan event at Menucha. They’d be sitting together in the opening circle, at our meals and in sessions where we spoke of our experiences with the latihan and its impact on our lives. It seemed that they were inseparable.

These kedjiwaan events are filled with conversations with those you’d just met. Sometimes someone would talk about an experience in Subud you want to know more about it and you’d speak further. And, I wanted to catch up with people I’d met there before. And, there were the latihans. It seemed like it was a rare moment when I had the time to explore the back story of how someone found Subud and where that opening had taken them.

The more Subud work I did, the more opportunities I had to hear these deeper stories. It was when I became a Subud Pacific Northwest regional helper that I learned of the Bruggers.

On Friday, March 17, 2017, Marius Harold and I traveled to Boise, Idaho to witness the opening of the husband of one of their members. The Bruggers put us up in their home and provided meals for us including a fantastic potluck group selamatan with the MacDonaghs, Lockhart’s and Caleb Chung. After the opening and group latihan using the living room and one of their 3 car garage spaces which had been walled off and turned into a latihan room with nice carpets.

During this visit, I heard some of Sofyan’s stories about his early days in Subud. After checking with Halimah Brugger on the details I remembered, I’ve decided to include what she sent me (which was so interesting, and, more factual):

Even before Sofyan went to university, he wanted to learn Bahasa Indonesia so he could understand Bapak.  He learned quickly.   He received his degrees in Oriental Languages, Arabic and Turkish, from Oxford University.

After graduation and a stint teaching in Turkey, he was looking for a job.  He applied as Producer in the Indonesian/Malay section of the BBC, passed the Indonesian language test, and got the position.  A great deal of his work there involved checking the work of the Indonesians and Malaysians for accuracy.

Sofyan’s office was very near the UN where Varindra  worked.  They occasionally met for lunch.  Varindra told Sofyan about the work being done at Wisma Subud. Sofyan’s understanding of languages, including Indonesian could be helpful in this work. Would he be interested in moving to Jakarta and assisting in that work?  He was and he did.

I’ve learned since then that his work helping with the translations included over 120 of Bapak’s talks and thousands of Bapak’s responses to member’s questions.  It was there that he met and married his wife, Halimah, in July of 1969, which was reported in Vol. 3, No. 6 of Subud Voice.   [For more about their life at Wisma Subud, visit the WSA archives.]

When Sofyan arrived in Indonesia, almost the first thing Bapak said to him was, “Learn Spanish.”  Later he would translate many, many, long letters from South American members from Spanish to Indonesian.

About two evenings before the opening of the 1971 World Congress in Indonesia, Bapak sent Sofyan the address that he would give at the Congress in front of President Suharto to be translated by the next morning.  It was published in the Congress brochure and is probably the only “Talk” Bapak prepared in advance and in writing.  Nowhere will you find Sofyan’s name as translator.  In those days it didn’t seem right to include the translator’s name.  Sofyan did not mind.  He didn’t wish to put himself forward, and only wished to serve Bapak.

Sofyan took other jobs in Indonesia, including teaching at the Jakarta International School, UNESCO, and UNICEF.  However, even when he worked at these jobs, Bapak, the Sekretariat and Sharif continued to send him letters and talks to translate in the evenings.

Later after Bapak died, Ibu Rahayu sent him letters to translate right up until we left Indonesia in 1997.  Sofyan had lived in Indonesia for 31 years.

On that first visit in 2017, Sofyan was trying to recover from a back injury with the help of Dennis Lockhart, a former US Army medic, who assisted him with his physical therapy. Through this work with Sofyan, Dennis became interested in Subud and was opened this trip.

On my next visit in 2018, Sofyan was confined to a wheelchair and he and Halimah had moved their bed down to the bottom floor of their home so that she could take better care of him. Though the work was very time consuming, Halimah’s care and love for Sofyan was always there, along with her care for their son, Silan who is mentally challenged.

This time Rosalyn Neel – wanting to dive right into the work of being a regional helper, even though her “official” term hadn’t started yet – joined me so that there could be a woman regional helper as well as a man.

In spite of all the challenges facing her household, Halimah organized a group potluck for the whole Boise group. Our Irish themed dinner consisted of “Bubble and Squeak”, green veggies, salmon and salad, with ice cream and fruit for dessert. It was a wonderful meal which was enjoyed by one and all.  No Guinness was served.

Before dinner we did latihan. I always experienced something unique in my latihan when I went out to visit groups and this was no exception. My latihan was a deep and clear.  I felt grateful to be doing latihan with these members who were keeping the latihan alive in Boise.

So many interesting stories were told after dinner and cleanup were done. We spoke of our lives and the people we’d met on our journeys before and after being opened until nearly 11. It was great to see everyone again and understand in a deeper way their stories.  All of it had been made possible through Halimah’s effort.

In December of 2019 Sofyan had emergency surgery. Marius Harold and I wanted to visit him and have the chance to do another latihan in person. Nadia Woodcock was to join us so that there would be a woman visiting as well. It took us until March 2020 to organize ourselves just as the COVID-19 pandemic was getting started. As more and more information about the virus was known, it became clearer and clearer to all of us that if we went to Boise, we might bring the virus to the Bruggers. So, at the last minute we reluctantly cancelled our trip.

I was determined to support Halimah and Sofyan in some way. As more and more of us did the virtual latihans via phone, it occurred to me that I might also do this with Sofyan.  And, so, after checking this out with the two of them, Sofyan and I began doing phone latihans once a month.

I cherished each and every one of these latihans. The depth of receiving I experienced in them was unlike any other experience I had had before. One thing in particular I remember was that I felt the latihan start right away which was not always the case for me. And, I know that the reason for this was that was I was doing latihan with Sofyan Brugger.

In thinking about what I wanted to say in this remembrance I did some research on Sofyan in the WSA Archives. There I found a Bapak talk that he’d translated. It’s Bapak’s Talk in Singapore, December 3 1958, “FOLLOWING THE DEATH OF IKHSAN…”. In this talk Bapak says this about Ikhsan Ahmad Muhammad, who had died suddenly:

It is generally the custom for people who follow a religion, or are obedient to God, to say, when a human being dies, that he has been called by the One God.

Viewed superficially, it really feels very heavy to be left by a friend, or someone we know very well. But if we reflect more deeply, we realize that we who are still alive will also not escape death, and it becomes clear that our brother Ikhsan’s death was only a question of time. There is time a long way off; there is time near at hand.

So, there are those who still have a long time; there are those who do not. Clearly, we who are still alive are sure to follow him one day; we don’t know when. This is why we simply give thanks to God that God has willed our brother Ikhsan to go on before us. Such are our feelings and reflections on human death, and on the death of our brother Ikhsan whom we have known for so long.

In reading this, I was reminded of my own mortality and that there is still time for me to continue to do the latihan regularly, with patience and submission. I am glad I have time.

There will remain in my calendar, for a while at least, the monthly reminder of my time to do latihan with Sofyan. I need to keep it there for a while as I let go of our brother and pray for his journey after this life and for his family who are left behind.

Link to some of Rachman’s photos of Sofyan (and Halimah) Brugger.